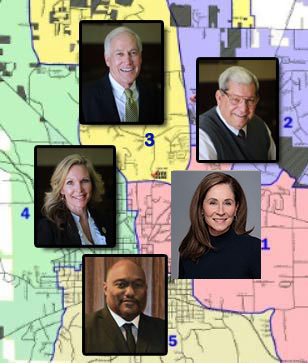 The City of Jasper has a mayor-council form of government. The council is the local legislative body upon which rests the responsibility of determining the policies to be followed in the administration of the municipal government. In almost every instance where state law grants authority to cities and towns under the mayor-council form of government, such authority must be exercised through the council. The council is the ultimate source of power in the mayor-council city or town, and in its exercise of this power, the council determines the extent to which the governmental and corporate functions of the municipality are exercised.

Statutory Authority.  Jasper is a Class 6 municipality (Cities of not less than 12,000 and not more than 24,999 inhabitants), and the authority and power of the mayor and council are dictated by state law in the sections of Chapter 11, of the Code of Alabama which apply to Class 6 municipalities.

All council meetings are held at the Jasper City Hall Council Chambers, 400 West 19th Street, Jasper, AL, on the first and third Tuesday of each month at 10:00 a.m., unless notice of change is given.